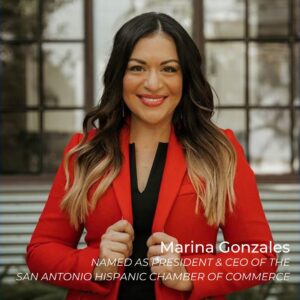 South Texas native will assume the role in mid-August
The San Antonio Hispanic Chamber of Commerce (SAHCC) Board of Directors announced Marina Gonzales as the new President and Chief Executive Officer of the 91-year-old organization. A native of South Texas, Gonzales, who most recently served as President and CEO of Child Advocates San Antonio (CASA) brings a diverse background in public policy, advocacy, strategic planning, fundraising and business development to the role.
“Marina’s wealth of knowledge, experience, and track-record make her the top candidate for this critical role. On behalf of the board of directors I want to congratulate and welcome her as our new President and CEO,” said Dr. Erika Gonzalez, SAHCC Chairwoman. “Her connections with the San Antonio community and her strategic leadership will transform our organization. We are incredibly excited to begin working together and for the future of our beloved Chamber.”
A search committee was formed earlier this year and led by Denise Hernandez, True Flavors Vice President of Development and SAHCC Chair-Elect. The committee was comprised of local and national leaders, each of whom brought knowledge and expertise to identify the most qualified candidate for the Chamber
“I want to thank our search committee for their commitment to this process during these challenging times. We are confident they found the best candidate who will bring innovation and growth to our Chamber,” said Denise Hernandez, SAHCC Chair-Elect. “I am certain Marina’s vision and passion for advocacy will better our business community and it will be an honor to work together with her and our Chair, Dr. Erika Gonzalez to lead our chamber into a new era of success.”
Gonzales holds a J.D. from the University of Illinois-Chicago John Marshall Law School, and a B.A. from St. Mary’s University. Prior to her role as President and CEO of CASA, Gonzales served as an executive with CentroMed, overseeing government and legal affairs and prior to that, was Chief of Staff to Texas House of Representatives District 117.
“As a first-generation college and law school graduate, and daughter of an entrepreneur, I understand the critical role that Hispanic-owned businesses play in the success of our community and our economy,” said Marina Gonzales, SAHCC Incoming President and CEO. “Our businesses and our nation are facing unparalleled challenges and I want to ensure our Hispanic Chamber members are successful. I will work with staff, stakeholders and our board of directors to ensure we are at the forefront of advocacy and policy that will lead us to resiliency and recovery.
Gonzales will officially begin her new role as President and CEO of SAHCC on Monday, August 17, 2020. Major General (USMC Ret) Juan G. Ayala has served as the Interim President and CEO of the organization since March as he continued to oversee his main duties with the City of San Antonio as the Director for the Office of Military and Veteran Affairs with a part-time loaned executive agreement with the Chamber. Moving forward, General Ayala will remain active as the Chair of the Development Committee and member of the SAHCC Executive Board.
“I also want to thank General Ayala and the City of San Antonio for their support during this unique transition period for our Hispanic business community. It allowed us time to ensure we had a strong leader to position our chamber for future success,” said Dr. Gonzalez. “General Ayala’s leadership has been invaluable to our members during the pandemic, he and staff have worked hard in providing resources and guidance along with reassurance San Antonio will persevere.”